This is the multi-page printable view of this section. Click here to print.

Return to the regular view of this page.

Compiler concepts, components and their interaction

The frontend is responsible for handling the compiler’s primary input–an ML model. With many ML frameworks in existence, the compiler isolates the specific framework support in the frontend. In other words, we envision multiple dedicated frontends able to handle models created by each ML framework. Currently, there are two frontends supporting TensorFlow and ONNX with input in the form of model.pb and model.onnx files correspondingly. The frontend parses the model, represented in the form of a graph. It uses one or more output nodes to linearize the graph in a series of nodes respecting dataflow dependencies.

The frontend then processes this linearized series. During this processing, the frontend is grouping model nodes to form layers. Each layer represents one entire cycle started with matrix multiplication, followed by a series of accumulator operations and finalized with moving the result out of accumulators. In essence, the content of accumulators and systolic array weights is never shared between layers.

The frontend interacts with the memory manager to obtain necessary memory objects. There are two banks of memory directly accessible to the host: DRAM0 and DRAM1. The compiler dedicates DRAM0 to store variable data objects (Vars) such as inputs, outputs, and the data passed between layers. Next, it dedicates DRAM1 to various constants (Consts), such as matrix multiplication weights and bias, constants used in accumulator operations, and constants used to blend with variable data objects (like zero-padding). The frontend creates a new instance of the scheduler for each layer and submits a series of high-level intermediate representation (HIR) operations based on model nodes present in the layer. The frontend allocates special temporary (Temp) memory objects to pass the data between HIR operations within a single layer. The scheduler is later responsible for mapping this temporary memory to available accumulators.

We support a subset of ONNX v8.

The memory manager is responsible for allocating and freeing, when necessary, memory objects. Memory object represents a series of memory addresses (memory span) with associated tensor dimensions. The scheduler uses dimensions to ensure the correctness of the dataflow. In addition, the memory manager is tracking pending constants found in model nodes. The pending means that when the frontend processes the constant, it is unknown if it will become a memory object or be used as a parameter to one of the HIR operations. When a pending constant becomes a Const memory object, it gets emitted as a part of the model.tdata file later used by the driver to place into host memory. The memory manager also emits a memory map for Consts and Vars memories. Such a map is included in model.tmodel file to inform the driver of the memory layout to place the content of model.tdata file, as well as model’s inputs and outputs.

High-level intermediate representation (HIR) is an interface offered by the scheduler. It expresses common ML operations abstract from specific ML frameworks, such as ONNX. It also operates in terms of memory objects.

Following are a few examples of HIR.

The emitRelu function performs ReLU activation on the input object and places the result in the output object. Both input and output must be Temp objects.

The emitSave function moves data from the Temp input object to Vars output object, usually at the end of the layer. 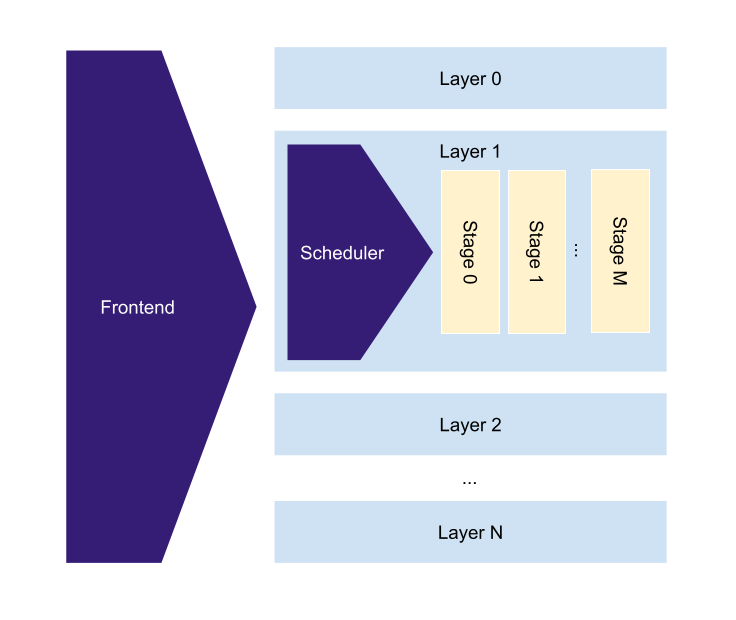 The scheduler is responsible for transforming the high-level intermediate representation (HIR) produced by the frontend to the low-level intermediate representation (LIR) consumed by the backend. The main objective of such transformation is to schedule HIR operations expressed in terms of relatively large Vars, Consts, and unlimited Temp memories to limited SRAM local memory and accumulators available to a specific configuration of the processing unit. Internally it achieves this by building a dataflow graph based on memory addresses and finding its maximum partitioning that fits the local memory and accumulators. Such a partition is called a stage. The scheduler then produces LIR for every stage independently. Like for the frontend layers, stages don’t share weights in the systolic array nor the content of accumulators. At the moment, they don’t share data in the local memory either, which we expect to change once the compiler has to work efficiently with larger-sized local memory.

Low-level intermediate representation (LIR) is an interface offered by the backend. It expresses instructions supported by the processing unit. Unlike HIR, it operates in terms of memory addresses. Each memory address is tagged with its memory type. While HIR memory objects are expected to contain Vars, Consts and Temp tagged addresses, LIR only accepts Vars, Consts, Local memory, and Accumulator tagged addresses. One of the key scheduler roles is to do this translation.

Following are a few examples of LIR. Each produces the corresponding processing unit instruction. Note that LIR is not using instruction flags directly. The backend role is to infer these flags based on LIR arguments, such as accumulate and toLocal booleans and memory address tags.